Our hard working Band Chair and Solo Horn player Joan Ballantine passed away suddenly on 30th October. Our condolences go to Ross and Hannah, her son and daughter, their partners and her grandchildren.

Welcome and many thanks for visiting our web site!

We are a traditional brass band which strives to provide quality entertainment for the general public by playing concert music rather than entering contests. 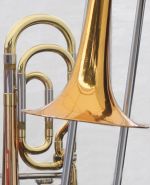 Ellesmere Port Concert Brass (EPCB) is a registered charity raising funds from a number of sources. Fortunately we have received sponsorship over the years from several  local employers, for which we are extremely grateful. We ask for a small subscription from members, but payment for playing concerts is by far our biggest income generator.

In the main we play in the Wirral and Merseyside area with excursions into rural Cheshire.  We meet weekly on a Thursday evening for practice at Capenhurst Village Hall (Ellesmere Port)

Please navigate the site to find out more about us including our long and proud history as a brass band and also our up to date Events Diary.

Our first Christmas event of 2019 was on the 11th November at Gordale Garden Centre's Christmas Charity Spectacular.  We were joined by a Signing Choir who provided the music for the first part of the evening; we had our usual position on the mezzanine whilst the choir set up on the steps leading up to it. Click on the view from the balcony to see a zoomed out image.

You can learn a bit more about the event a see some other pictures by following this link - Gordale Christmas Charity Event.

Two Bands For the Price of One!

In June this year we combined forces with a band from Portsmouth.  The Royal British Legion Victory Brass Band visited us in Ellesmere Port. The Joint Concert Video picture was taken at the concert at Trinity Methodists Church,  on Saturday 29th June. If you click on it you can see a short (nine minutes) video of snippets from the concert.  You can see some other images from the concert by following this link - Trinity Church Concert.

The second was on the following Sunday at the National Waterways Museum in Ellesmere Port at lunch time - see the image on the left.  It was an early performance as the Portsmouth Band had to head home in the afternoon.  We have played there on several occasions and it is a very pleasant venue and everyone enjoyed  playing in the sun.  You can see some images from the concert by following this link to Waterways Museum Concert.

We started our Christmas season early with the Gordale Charity Event.  However the real start is on the evening of the  5th December at the Mayfield Nursing home. After that, on Sunday the 8th, we will be playing  at the Marks and Spencer superstore in Cheshire Oaks  between 11am and 3pm.  Come along,  do your shopping and listen to the band.

We welcome all players of whatever ability...you are encouraged to come along and join us for our Thursday evening practice and hopefully become a member of our band.

Currently we have vacancies for a drummer and Bb and Eb Basses, and, of course, there's always room for more cornets - both on our back and front rows. If you don't own your own instrument we can provide one for you.

We look forward to seeing you...soon just follow this link to get directions.

We are grateful to the companies listed below for the support they have given to the band:-

Please click on the logos to find out more information.