The History of The Band 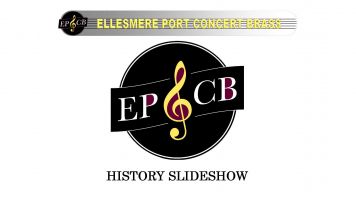 Some photos of the various bands, including those shown below, taken between 1900 and 2013 can be seen if you click on the HISTORY SLIDESHOW image. In the middle of the sequence is a 1958 picture of a young Ken Thomas playing cornet. He appears at the end, in a picture taken in 2013, still playing cornet but looking slightly older. 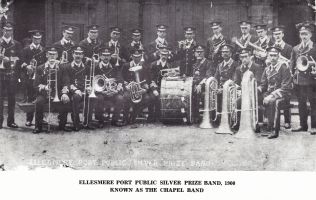 The origins of the band can be traced back to 1870, with the arrival of Mr Breckon to the community of Ellesmere Port to take up the position of a teacher at the school known as the "Prims" or "Breckon's School". The Drum and Fife Band that Mr Breckon formed was the foundation for the Public Prize Band, or Chapel Band as it was known. From the Public Prize Band (Chapel Band), the Church Silver Band was formed as a breakaway movement in the last decade of the nineteenth century. Evidence shows that during the years 1875 - 1900, the community of Ellesmere Port supported these two Brass Bands, and that by the year 1900 both the Public Prize Band (Chapel Band) and the Church Silver Band, were thriving organisations. 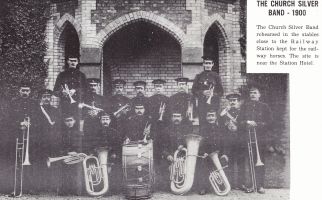 Both bands sustained a state of friendly rivalry throughout the period from 1900 - 1920, and although little must have taken place during the Great War of 1914 - 1918 as men of the community were called to go to war, the bands were successfully reformed in 1919 from those that returned from the devastation of those four years. During the year of 1913, the Salvation Army Band was formed, from which players in later decades would become members of either the Public Prize Band (Chapel Band) or the Church Silver Band. Both bands continued to go from strength to strength during the years 1920 -1940 and both bands were competing at the highest level of the Brass Band movement. 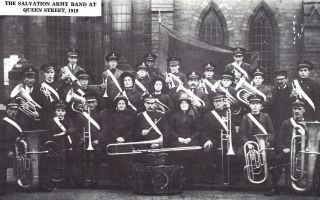 During these years, the Church Silver Band became known as the British Legion Band. During the Second World War 1939 - 1945, the bands were disbanded as the men went to war. In 1946 efforts were made to re-form the Band from the remaining players of the two bands and combined to become the Ellesmere Port and District Band (later known as the Ellesmere Port Silver Band). 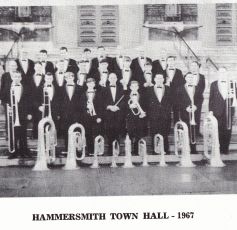 The band continued with steady progress throughout the 1950's and in the 1960's enjoyed the greatest triumph when the band went to London to compete in the National Brass Band Championships for two successive years. in  1966 and 1967 the reached the Championship finals and came 9th out of 23 bands in 1966 and 10th out of 22 in 1967 at Hamersmith.  You can see the results at 1966 Fourth Section Results and 1967 Fourth Section Results.  The picture at Hammersmith Town Hall was taken there.

During the latter part of the 1960's however, many of the players moved on and by 1975 an appeal was made for new members. The band helped to introduce brass tuition into local secondary schools, and that interest in youth is maintained to this day with many of today's players being in attendance at local schools or the product of tuition provided in the local schools

Throughout the 1980's, the band undertook more work than at any time of the band's history, playing at 55 engagements in 1985, featuring on BBC Radio Merseyside, as well as taking part in contest work. The band appointed a professional music advisor from the Black Dyke Mills Band to offer guidance with further contest work alongside the resident musical director who was a peripatetic brass tutor employed by Cheshire Education Authority.

During 1990’s the band went into decline as did many brass bands due to the relocation of work as the heavy industries closed, this was a disaster for the band as the membership fell to an all time low putting the bands future in doubt. Since the nineties the recruitment of band members has slowly increased and we are now conducted by Mr T.E. Pickering MBE ARCM who learned to play cornet and euphonium with the Salvation Army in Middlesbrough. We rehearse every Thursday evening at the Capenhurst village hall, Capenhurst from 7.15pm to 9.30pm.

The band no longer participates in contesting and in 2012 the band members voted to change the name of the band from Ellesmere Port Silver Band to Ellesmere Port Concert Brass. It was felt the name change would give a more comprehensive reflection of what the band represents and actually does; which is a concert band playing for pleasure and not a marching or contesting band.

You can see more about the recent history of the band by visiting the Interesting Things or Concerts pages, as well you can listen to the band at various public events throughout Wirral and Cheshire and all our furure engagements can be viewed on the Events page. We would like to thank our Band members for their continued support, hard work and dedication, which has helped the band to flourish and make it once again a brass band the community can be proud of. The future of the Ellesmere Port Concert Brass is looking bright but we still need support from the local people of Ellesmere Port and most of all, new members to ensure the bands future.