The title of this page has probably lured you to it and hopefully you will find the contents interesting.

Here we want to give you an idea of what type of band we are. We have put together a handful of items, selected from the Concerts pages, which we think reflect the band and will give you a good idea of how we sound and the sort of things we do. For each example we've included video where possible and a few popup images. We split them into three groups:-

Unusual Events- Here you will see us playing on a refurbished tram and performing in a joint concert with the Portsmouth RBL Victory band.

The Summer Programme - In this section you can see and hear a couple of our regular summer concerts.

Christmas Carolling - December is always a busy month for us Here you can see a slide show of some of the venues we regularly perform at.

Band on a Tram 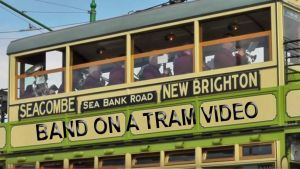 In 2015 The Merseyside Tram Preservation Society had restored tram 245 and to assist in it's launch we provided a fanfare as it left the tram shed and then played a selection of marches on top of a tram as it traveled from the shed to Birkenhead's Woodside Ferry. If you click on the Band On a Tram image you can see and hear us playing the fanfare as the tram left the shed and then get a pedestrian's ear view of us playing while the tram passes by.

It was great fun, the BTPS people made us most welcome, and, for once that year, the sun shone while we played..

The video was created from work by David Hennessey and Monopodman.  You can see their full videos on Youtube by clicking on their names.

Below are a few images of the band, just click on them to see a zoomed out image. For more images go to the Band on a Tram page. 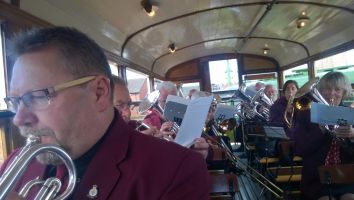 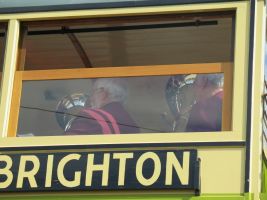 In June 2019 we held two joint concert with the Portsmouth Royal British Legion Victory band.  The first was in Trinity Church in the centre of Ellesmere Port and the second at the National Waterways museum again in Ellesmere Port.If you click on the Joint Concert Video picture you can see a fairly short (nine minutes) video of snippets from the concert at Trinity Church.

Bellow are a couple of images from both concerts you can see more by following these links:- 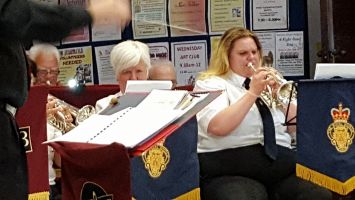 In the summer we have the usual band concerts in park bandstands.  Two of our regular venues are Vale Park in New Brighton  and Ashton Park in West Kirby. 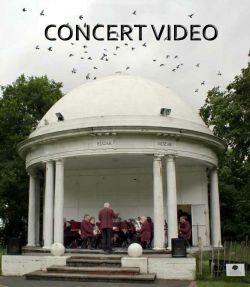 On a sunny September afternoon we played our last summer engagement for the year in Vale Park, New Brighton.  There was a large appreciative audience relaxing in their deckchairs, soaking in the last of the summer sun whilst we entertained them.

If you click on the Concert Video image of us in the bandstand you can see and hear some extracts from the afternoon - Spanish Gypsy Dance, The Entertainer - the camera microphone managed to catch an interesting whistled obbligato supplied by a member of the audience, the march Death or Glory and an extract from the Beatles' medley Beatles Gold.

We need to thank John Bridson and the photographer in the audience who were press ganged into taking the video. 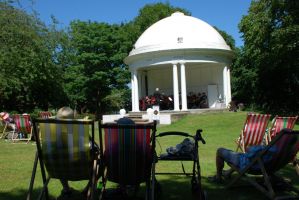 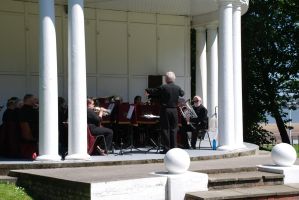 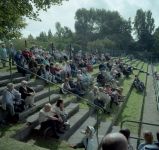 Whilst Vale Park is a traditional site with a wonderful bandstand and an audience all settled in deck chairs Ashton Park  (click on the image of the park lake to visit their website) is different.  It does not have a bandstand instead we set up at the edge of playing fields in dip presumably dug out to make the field level.  The resulting edges are shored up with large concrete steps which the audience sit on whilst the band is usually housed inside a specially erected marquee.  This means that, if it rains, the band stay dry whilst the audience get wet.  One year the park manger had to call off the concert because of the weather, we were fine but the torrential rain was soaking the audience which, in true British fashion, refused to give up and go home.

This year however we were presented with a beautiful hot summer afternoon for our annual concert. You can find some images from the concert below. 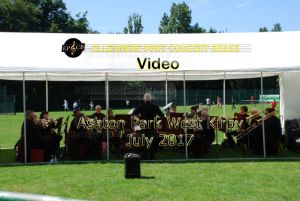 Just click on the picture above of the band in the marquee to see a video showing short extracts from the concert.  The pieces featured are,  Ferry 'cross the Mersey, Ammerland, Lamgstrump Samba, L.O.V.E. Pirates of the Caribbean, Ballad for Benny and Themes of 007. 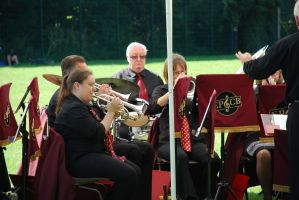 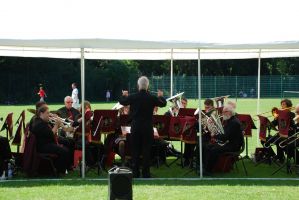 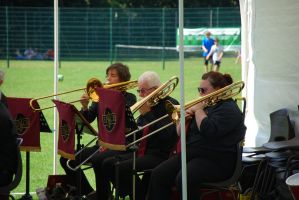 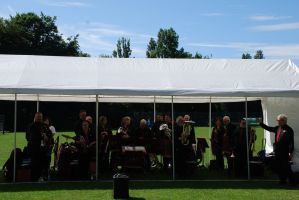 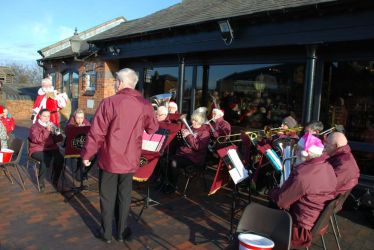 December is a month mapped out for carolling. The activities range from Carol Concerts both at churches and in Nursing and Retirement Homes to rattling collecting tins outside various venues.  In the slide show you can see us playing at The National Waterways Museum where they have a barge which brings Santa to the Visitors Restaurant and then takes people on a canal cruise - Our job is to play as Santa arrives and play again to welcome them when they return from the cruise - in between we warm up with tea and coffee in the restaurant.  You also see a couple of images of us in Gordale Garden Centre  playing for the launch of their Christmas period and playing outside Marks and Spencer in the Cheshire Oaks retail park - two of our regular Christmas venues.