Our second  concert with Portsmouth band was at the Waterways Museum at Ellesmere Port (learn more about them by clicking on the image on the left). We had to start at 11am as our  visitors had to head back home in the early afternoon.

The hazy sunshine led to a degree of indecision about whether or not it was too hot to wear jackets.  Steve Yoxon, Portsmouth Band's conductor, used his decisive conductorial qualities to make a decision and it was jackets off.  Or nearly, as you can see below.

The early hour meant that the audience was quite small but they made up for the lack of numbers with enthusiasm. 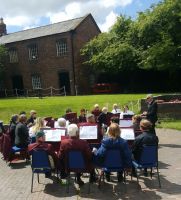 Jackets on or off? 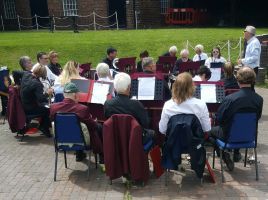 Or at least jackets off for all but one renegade. 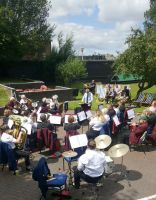